Ethiopia
By: Wings of Healing Update

I hope that you had an uneventful flight and a good sleep.

It has given me enormous pleasure to be associated with Wings of Healing but I have never felt that your website does justice to what you have achieved and the contribution you have made to the lives of so many impoverished women and children in Ethiopia. I have written this and hope that you will use it as part of your website or send it to a National Newspaper.

Ethiopia, a country the size of France and Spain joined together has a population of 92 million who have a life expectancy of 65 years. It ranks 162 in the world with regard to poverty but major improvements have been made in decreasing child and maternal mortality. In the past 4 years 13 new medical schools have been opened but the great majority of Ethiopian doctors work in the towns where private practice is available or for NGO’s for a much higher salary. Very few work in the rural areas where eighty five percent of the population live with no transport and miles from the nearest hospital with no specialists available. There are only 300 gynaecologists in the whole country. The average number of children born to women in the rural areas is 6-7. This, and poor nutrition causes stretching and weakening of the pelvic muscles resulting in urinary incontinence and in many cases the woman’s uterus and bladder descend through the vagina to the exterior. It is estimated that there 130,000 women with untreated urinary incontinence as a result of this and many more with untreated fibroids of the uterus causing pain and heavy menstrual loss.

I had been visiting Ethiopia up to nine times a year for 25 years prior to moving here permanently 8 years ago. Two years after arriving I was asked by a mutual friend to talk to Onsy Louca, a gynaecologist who was working at Northwick Park Hospital in North London. Onsy had set up a charity, Wings of Healing with the aim of helping impoverished women in a very poor country.

When I met him, I soon realised that I was talking to a quite remarkable man. The charity had no administrative costs and any expenditure for charitable work would be paid for directly by Onsy. His plan was to bring out to the selected country, a team of around 20 people twice a year for around 2 weeks, take over part of a hospital and operate on as many women as possible. 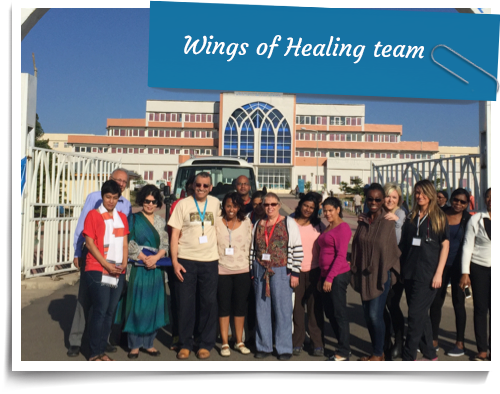 The Team would consist of gynaecologists, UK trainees, anaethetists, pharmacists, nurses, IT specialists and maintenance workers, a specialty never heard of in Ethiopia. They would all be involved in teaching the Ethiopian staff.

Their Time would come from annual leave and an excellent decision by the UK government to allow doctors doing overseas voluntary work, a 3 week leave of absence. This work and the training given would also count as part of the teams continuing professional development.

The Total cost would be met by Onsy. This would cover the cost of all their air fares, accommodation and living expenses. Any costs to the hosting hospital, the cost of drugs and long term treatment if required. He would buy sets of the surgical instruments required have them sterilised so that a new set could be used for each case to overcome delays in waiting for equipment to be sterilised and would leave the sets with the hospital. In addition he would buy all the scrub suits, sterile gloves, sutures, syringes and needles.

I was able to persuade Onsy that Ethiopia was a country that desperately needed him. Unfortunately the only hospital available that was able to give up beds and operating theatres was private. The increased cost was again paid for by Onsy and all the women treated were selected from those who turned up following radio and newspaper advertising and the most needy selected. This hospital also ran an orphanage and not only did each child receive a gift on each visit but Onsy contributed to the further development of the orphanage to allow it to double its intake.

In 2015 the Ethiopian government made the treatment of Urinary incontinence and prolapse of the bladder and uterus a priority. Why had it not been dealt with before? Women with urinary incontinence and/or a uterus falling out of the vagina smell. They are often ostracised by their families. They don’t go out or socialise or go to church. They are not allowed on public transport or welcome in hospitals because of their smell and laundry requirements. Even if they were there would be nobody who could deal with them. Because it is a rural problem gynaecologists in the large towns would not see these women and as a result of not treating it were unable to teach others how to.

I was able to put Onsy in touch with the leader of the incontinence project and Onsy and his team made their first visit to Worede hospital from the 14th to the 25th of November 2015. This hospital in rural Ethiopia covers a population of 1.5 million. The team would start work at 6.30 am. and go on till 10pm. During this time they carried out 123 major operations with no complications and trained 3 Ethiopian gynaecologists along with the staff of many different departments.

I have no doubt that Onsy’s colleagues at Northwick Park are immensely proud of his achievements and also those Gynaecologists and Surgeons working in the NHS who will be very envious of the number of patients he has been able to treat without the interference of a clipboard carrying, target driven administrator.